Wheat production is crucial to maintain food security, generate rural income, and support the agricultural sector of Northeast Syria (NES). Despite this, the value chain is frequently inefficient, with many opportunities for improvement. This paper analyses the wheat supply chain in NES, with recommendations for reform.
On this page

Due to its importance to food security, providing job opportunities for the rural population, and its crucial contribution to the agricultural sector, wheat is a primary strategic crop in Syria. Between 2000-2011, the annual production was approximately 3.85 million tons with an average local consumption of 2.5 million tons, which allowed an export surplus of 1.35 million tons. This contributed to an increasing proportion of wheat in Syria’s exports. Soft wheat accounted for 47% of the 2011 total, with rain-fed just 16%.1 Statistics indicate that production fell sharply to 1.2 million tons in 2018, or less than half of domestic demand. This decline is attributed to several factors, including lack of support for wheat cultivation, lack of rainfall, destruction of irrigation infrastructure and water pumps, difficulties in providing fertilizers, seeds, and agricultural tools, and a drop in agricultural labor due to security conditions, migration, asylum, and displacement.2

The first section of the study provides an overview of the literature on the value chain, the  methodology, and the analytical framework for research. The second section focuses on the  inputs to the process of wheat production, including agricultural land, seeds, manure, pesticides and agricultural medicines, fuel, and water. The third section analyses the  production process in terms of operators, technical and technical support provided, and  agricultural tools and equipment. The fourth section examines the process of selling and  distributing wheat, which requires an understanding of the actors, pricing policies, prices and  facilities provided to farmers, the final destination of wheat, and the profitability of the farmer and buyer. The latter section proposes some recommendations based on the results of the analysis of previous sections and the viewpoint of the experts interviewed for this research.

The results of this study of all activities across the wheat value chain indicate various constraints that negatively affect the efficiency and sustainability of production. Key informants have directly pointed to many of these constraints, including high prices of fertilizer and seed, a lack of technical support and agricultural stewardship committees, lack of financial loans for farmers to support the production process, slow maintenance of water systems the need for locally-based fertilizer production plants, a lack of  large silos as a result of war damage. Also mentioned is the migration of professional expertise and agricultural workers, a weak presence of international organizations supporting wheat production in the region, a lack of monitoring and follow-up on the implementation of decisions in support of farmers, and delays in the payment of farmers’ dues after the delivery of the crop.

In determining the price of wheat, the Economic and Agriculture Committee in the Autonomous Administration relies on studies and proposals submitted by the autonomous  and civil administrations and the economic and agriculture committees in different regions.  However, many farmers consider the pricing process to be not based on clear scientific  grounds and influenced by the views and individual interests of the participants. These farmers believe that the administration should be more transparent in determining a unified price for wheat and rely more on technicians and experts in this field. Within the framework of the actors in the governance of  wheat cultivation, the Autonomous Administration relies on the private sector extensively to  secure the inputs of this cultivation, but this is not accompanied by effective control or intervention mechanisms that control prices in the market. International organizations do not provide any effective support to the Autonomous Administration in the process of wheat production because most of these organizations deal only with official governments or licensed non-government organizations (NGOs). This impediment to direct cooperation can be overcome by supporting and facilitating the establishment of active civil NGOs interested in the agricultural issue in Northeast Syria and strengthening cooperation between these institutions and international organizations, thus opening channels of indirect cooperation between the Autonomous Administration and international organizations.

The reliance of a large part of the population on wheat cultivation for income, its contribution to food security, and its strategic importance renders it crucial to overcome bottlenecks in the value chain that this research paper has outlined.

The policy and practical measures that can be adopted by local authorities can be  summarized as follows:

The above proposals require a transparent institutional environment and the rule of law, effective monitoring and monitoring tools, and the participation of all actors in the planning  and implementation process, including the private sector, farmers, and agricultural associations. The appropriate institutional environment encourages international actors to  provide the necessary technical and financial support. International research centers are also encouraged to provide the necessary assistance to increase the productivity of wheat lands and thus their yield to all actors, especially farmers. Secondary data and information from key persons indicate that the average production of a watery hectare in the studied area is about three tons of wheat. In a number of wheat-producing countries, the average is about 4.5 tons. Increasing production by 50% to align with the international average can increase profits and support the strategic wheat stock in the region, with the surplus being exported in hard currency through cooperation with the local private sector. 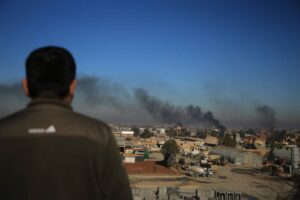 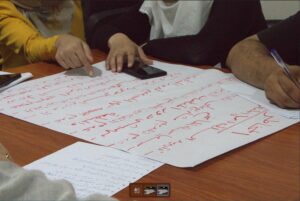 PrevPreviousAftershocks: The legacy of ISIS in Syria
NextCivil Society in North East Syria: A closer lookNext
Scroll to Top